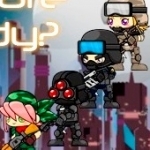 Shootingheads is a very simple 2d shooter game where you battle against other players in a platform-type arena. Shooting Heads is a great game that you can play for free at in friv2017.com. Regardless Shooting Heads game, we provide many cool Friv 2017 games to play for free.

Use WASD And Arrow keys button to Move, Use Left Mouse button to Shoot, Use Spacebar button to Jump,